Christmas in the Media Then and Now

Was Christmas treated any differently by the media of 1910 from the same media of 2016? Did Santa appear the same as he is depicted now? Let us compare . . .

If you look at this week’s Gazette newspaper (2016) you will see Christmas on the front page – a school Christmas concert. Many advertisements from various retailers plugging various Christmas sales. A whole page on ‘the true meaning of the season’. A section of Christmas greetings and letters to Santa from the kids.

if you look at the Evening Sun of Dec 23rd, 1910 Christmas is not mentioned until page 4 where you will find:

And that’s all there is of Christmas in the newspaper that came out two days before, The Grand Forks Evening Sun.

How about the Gazette of Dec 24th?

So between the two newspapers of 1910 it’s fairly clear that the Gazette sales department gets in the mood of the season and the Grinch rules the roost over at the Evening Sun. 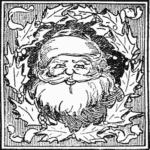 Also of note: In the corners of the large ad on the last page of the Gazette you will see an artist’s rendition of Santa Claus. This is 20 years before the Coca Cola company began portraying him as a jolly bearded roly poly fellow. Many people are under the false impression that the red suited figure we see everywhere today is an invention of the Coke company but that is not the case. As the article at Snopes.com points out this version of Santa existed before Coca Cola began using it.