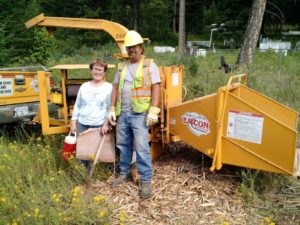 We had a work party at the Phoenix Cemetery in the early morning of July 15, 2017.

Barry Noll and Al Donnelly from Greenwood showed up as well as Mike Nadon with equipment from EMCON. With board members Doreen Sorensen, Jo Ann Sergeant and Les Johnson that made 6  people.

Mike brought along a chipper from EMCON so we could deal with the piles of wood debris just outside the bottom fence. It took nearly two hours but eventually we turned it into a mound of wood chips which nature can more quickly turn back into food for the forest.

With the heat of summer we had to start early and end early – after two hours we were bushed, the mosquitoes had arrived and so had the sun. The sunshine also means a lot of greenery is cropping up and we’ll have to be doing something about that. Especially the volunteer trees . . .

Thank you to EMCON for the loan of the equipment – we couldn’t have done it without that.
And a big Thank You to Mike Nadon for bringing it, operating and putting in the time.

Barry had brought tools enough for more in the hopes that the party would be larger – thanks Barry, we hope to get those numbers up in the future. In addition to clearing he did give some of the metal pipe enclosing one of the graves a cleaning and fresh coat of paint.

Al was clearing brush out of the upper cemetery so the upcoming marker placement for Adoph ‘Forepaw’ Sercu can take place.

The Phoenix Cemetery is a community space – it is part of the history of the area. And it takes a community of volunteers to preserve and maintain it for future generations. We’d appreciate any help you could lend us – keep visiting our site to see what we’re doing and when we’re doing it.