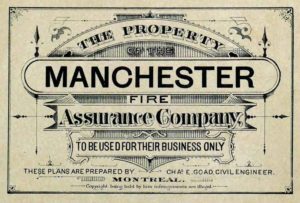 With the latest issues of the 1911 newspapers reporting on the fire in downtown Grand Forks a few things were apparent: Street names were referenced that no longer exist and some streets mentioned by name are not the same streets they are today. For instance there is a Second Street that runs North/South through downtown today but back in 1911 that same street was called First Street. Back then Second St. was the one we call Third St. today.

These are taken from a set of maps prepared in 1901 for the Manchester Fire Assurance Company. There is another set for 1912 – the year after the major fire in 1911. These are from are from the collection at the Boundary Community and Museum Archives. Eventually we hope to have these maps available online as well so we’ve created a new category just for this purpose.