Times Change, People Not So Much

One of the recurring feelings I get as I peruse the newspapers from a century past is how many of the issues we face today were the same as those faced by our grandparents.

In this weekend’s newspapers from 1911 two examples of this jump out at me.

First – Conflict Of Interest by Politicians 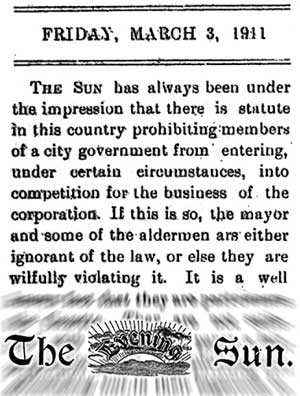 In the news right now you can read articles in the ongoing discussion about whether or not the President of the USA, Donald Trump, is in a COI with regard to commercial properties around the world that have the Trump name on them. Our own local politics has seen a sitting councilor taken to court over a possible COI.

In the March 3,1911 Evening Sun on page 4 the first column speaks to the COI of local municipal politicians in Grand Forks. It would appear that one or more sitting council members, including the Mayor, have an ownership stake in the other newspaper, the Gazette. And the publisher of the Evening Sun feels that they are COI and feeding their newspaper city advertising and not posting those same ads in the Sun. He sees that as them lining their own pockets at the taxpayers expense.

Second – The effect of increased Women’s rights on Society.

This week in the European Parliament an MEP from Poland, Mr. Janusz Korwin-Mikke, stated that “Of course women must earn less than men because they are weaker, they are smaller, they are less intelligent, they must earn less, that’s all,” Apparently this isn’t the first time he’s said things like this and even here in the 21st century he is not alone in his beliefs. Typically a conversation with someone espousing these views would continue with the harm to society that women having these rights causes.

If you read the 3rd page of the Mar 4, 1911 Gazette you will find an article titled ‘But A Short Jump Backward’. While the author doesn’t single out Women’s rights as the sole cause it does figure prominently in the piece. “Women are breaking into the pursuits of men. In Paris there are many cabwomen and in some of our cities in the west there are policewomen. There are women lawyers, women barbers, bartenders, farmers, physicians and journalists. Women are smoking cigarettes and the men, some of them, are trying to break themselves of the habit.” He finishes the piece wondering if we’re “going back to original conditions” and ends with “swinging airily from limb to limb, knocking down cocoanuts.”