Hello to all Life Members, Members and Friends of the Boundary Historical Society;

Well, hello there, it’s been a long, long time…. a little Willie Nelson and the first words that came to mind as I began this long overdue newsletter. I apologize for being so remiss in getting a newsletter out. As the song says “time just slips away”.

The good part is that we have been very busy in the six month interlude between letters. 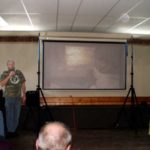 some new faces and lots of our members out. Frank Schlichting was our guest speaker and he did an excellent job of showing pictures of and telling interesting stories of his exploration of BC Mines. The audience was enthralled with his stories and pictures and had a good number of questions to ask him and were happy to relate their stories of exploring mines. It was great to meet his wife, Sarka, too. She was a huge help with the luncheon and we certainly appreciated her aid.

Laura Lodder, who is the editor for Report #17, has sent all the articles for our next Report to Les Johnson. Decisions have to be made on editing, the appropriate number of articles and whether some will be held over to issue #18. Les Johnson continues to work on the Report. He experienced some problems with Publisher and had to revert to Adobe In-Design. We will be publishing this report this year but we’ve passed most of our deadlines and are not setting a new one. We need to take our time and publish a Report that will meet the expectations that people associate with our Reports. It was decided to leave out the lists of people who had died and that information will be publisher as a separate booklet. 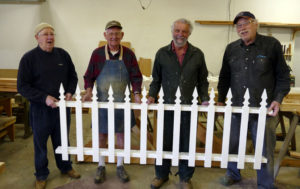 The Boundary Woodworker’s Guild has been an enormous help to us with refurbishing the picket fences and building new pickets and frames. We supply the materials and they do the work. They’ve also kindly used some of their “spare” wood. The Guild has been very generous and has taken the new picket cradles up to Phoenix Cemetery and placed them. At our Annual Picnic which was held at the Doukhobor Heritage Milling Society’s Pride of the Valley Flour Mill we presented the Guild with a cheque for $500.00 and a Certificate of Appreciation. Bob McTavish accepted the certificate and cheque on behalf of the Guild. The Guild is willing to continue working with us and their expertise is of great value. Our Picnic was small but convivial and most of us took the tour of the mill that was offered by Dave Dittrich. We gave a $50.00 donation to the Milling Society and there was a donation box available if people chose to leave one. The rain held off and there were lots of goodies, coffee, lemonade and watermelon. Good conversation, good historical information and a fun day.

Al Donnelly, our retired Past President, emailed us in the spring asking if we were interested in placing a headstone on Forepaw’s grave in the Upper Cemetery. We replied that we had been considering this issue for almost a year. He took over the planning of the headstone and it is in the works. Grand Forks Funeral Home were contracted for the stone that was placed on William Bambury’s grave and we decided, with Al, that we would like the same style for Adolph Sercu (Forepaw). With contributions from Greenwood, from our Board members and potentially from Belgium we have the cost of the headstone covered. The Baker family went to work on finding out the cost of the headstone and in doing their research found that the engraving company they use do not do that style any more – haven’t for 10 years. However, Aaron Baker told the company why we wanted it and they agreed to do it and Grand Forks Funeral Home most generously reduced the cost for us. We plan to place the gravestone in August – close to the anniversary of Forepaw’s death. Al Donnelly has been such a help to us and we are very grateful.

We are currently working on republishing the Phoenix Cemetery booklet. Doreen McLean(Greenwood Museum) had mentioned that there were some errors in the list of people buried at Phoenix Cemetery. When R.M. Simbrec did the research for the book, she listed the people buried there as probable burials. Al Donnelly, after much research, was able to confirm 144 of the burials. Some of the people simply have no information available and some of the people listed were buried elsewhere. We are acknowledging the work done by R. M. Simbrec and Al Donnelly on the cover of the new booklet. Spelling errors have been corrected and a little more information has been included. We are hoping to have the revised book available for sale at Greenwood’s Founders’ Day on July 8th and 9th this year. We will be attending both days and will have our publications for sale along with memberships. We have held a number of small work parties at Phoenix. One thing we are all in agreement about is that there needs to be better signage directing people (especially from the Grand Forks side) to the Cemetery. Although I have been there many, many times I got thoroughly “lost” the last time we went up!! Les and Al were just going to send out a search party when Jo Ann Sergeant and I finally arrived. Some of the members of the Woodworker’s Guild are going to go up with us and discuss priorities and which picket fences need to just be painted. Mike Nadon, Director Mickey Keller-Nadon’s husband, works for Emcon and on July 15th he will be bringing up a truck and chipper to clear away all the debris at the bottom of the Cemetery outside the fence. Some of it will be chipped and some taken to the Greenwood landfill which is open on Saturday. We are also hoping to do some painting of picket fences. If anyone is interested in helping, please just meet us at the Cemetery at 9 a.m. or call Doreen at 250-442-2274. We do have to say a large thank you to the anonymous person(s) who cleared out all the willow on the left hand side of the Lower Cemetery – a job well done!

A set of Reports was sent to the Beaverdell Community Library for their use. We plan to send another set of Reports to UBC Okanagan but have not heard back on the paperwork required. The first set of Reports sent was for the Archives and these would be for Circulation. Les is still working on scanning the Reports to send to the UBC Archives and he is “killing two birds with one stone” as we will then have a publishing quality scan of all our reports which will make republishing of any of them so much easier.

Irene Perepolkin and I have begun our summer bread making and baking at the Boundary Museum and Interpretive Centre. Tourists (and locals) enjoy bread made with Pride of the Valley Flour and baked in the brick oven. If you are in the area on a Thursday drop by around 11 a.m. or so and have a taste, buy a loaf if we have enough – all proceeds go to the Museum.

I think I have “talked” your eyes off! I promise to keep you updated more often. I do have to mention that Ron Hyde, a friend of the Historical Society, sent us an email regarding some pictures that he had rescued while working for the BC Liquor Control Board. They were going to be destroyed and he saved them. He’s currently in the process of “sending them home”, a huge task. We received two pictures of the 1948 flood in Grand Forks and Les will post them on our website (www.boundaryhistory.com) along with Ron’s letter. I will be taking them to our Boundary Museum Archives at Grand Forks City Hall.