Recently snooping on other people’s telephone and communications have been back in the news because the current president of the USA is publicly speculating whether his predecessor was ‘bugging’ his residence in New York. 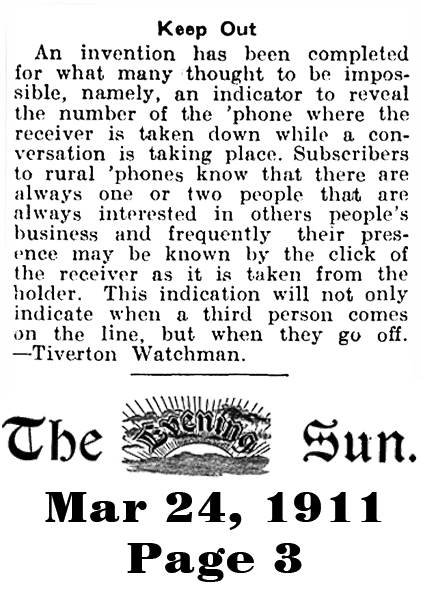 Back in 1911 some had similar concerns with their telephone calls as well though it was nosy neighbours thought to be the culprits.

This was due to the nature of the phone system back then. Many, if not most, people were on a ‘party line’ system. That meant their telephone line was shared with other subscribers. When the phone rang you listened to see if the combination of short and long rings were yours or not. If it was yours you picked up the receiver and talked with whomever was on the line. Usually that was the operator and then they connected you with your caller.

The problem with this system is that anyone else on the same line could also pick up their phone and listen in on your conversation. If they held their hand over the mouth piece you might not hear anything other than the click when their telephone entered the ‘party’. Even if you knew someone was listening you had no way to know who it was unless someone caught them doing it..

So as I was preparing the March 24, 1911 Evening Sun newspaper for the web my eye caught the article in the graphic on the right. Could it work? Would you want one?

You can read more of the news of the day on our Old Newspapers page.